Recently I had been thinking about another country to add in with Albion and Maple Leaf Country as an opponent. This , as some of you may recall, is a 54mm toy soldier ongoing project. The idea is to use old toy soldiers, convert some and maybe a few recasts. Anyone I was researching American uniforms of the later nineteenth century, particularly dress uniforms of the National Guard. I was aided in this by the fantastic prints from the Company of Military Historians -http://www.military-historians.org/company/plates/images/postCWUS.htm#z available on line ( I have a volume of their prints of the FIW and AWI bought in London 1986 which is a terrific book) and some books of my own-

Notes were taken and ideas pondered upon. I was also helped by a splendid new blog https://wargamingwith54mmtoysoldiers.blogspot.com/search/label/United%20States%20Infantry%20c.1880which shows what can be done with Britains guardsmen etc. I am looking forward to getting some eBay Britains and Dorset Toy soldiers heads and the fun can start. I was amazed at the variety of American uniforms in the prints. Loads of conversions asking to be worked on! 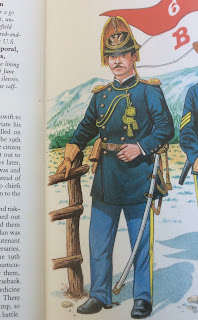 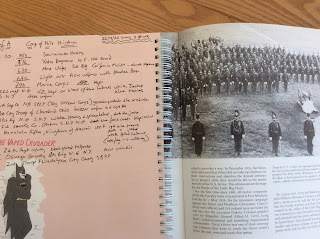