General Turner and his Brigade (  comprising 1st Lifeguards, 10th North British Foot, 6th Foot , Strathblane Highlanders, 15th Foot, North Albion Greys , horse artillery and some 95th Rifles) have been told to advance on the village of Torte. The village is believed to be held by the enemy.

Meanwhile The King of Heideland ( the Prince formerly known as Viceroy) has ordered General Knipp and his Brigade ( comprising 1st Wurst Hussars,Weltschmerz Kanone, Hoya Light infantry, Feldbataillion Lunneberg, Feldbataillion Bremen, Feldbataillion Grubenhagen and 4th Garde Bataillon) to reinforce Torte and deny it to the enemy. Here is a battlefield map- 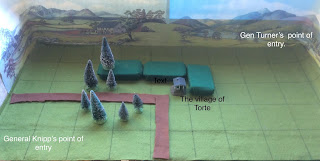 More news from the battlefield tomorrow. Rules being used are the Portable Napoleonic Wargame with Mike Lewis amendments.