Spring has Sprung in Umstrittental...

Spring has come to the Disputed Valley (an independent region betwixt the Duchy of Tradgardland and the Imperium) and the new campaigning season will soon be underway. The tented camps have survived a fierce winter and the troops are ready for action. Uniforms are darned, muskets checked and all await orders...
The Syldavian ambassador ( perhaps dear reader someone from Syldavia might post a comment here telling us more of him and his uniform so he could be depicted here by me on the tabletop-hint,hint...) is currently being escorted across the arduous terrain from Tradgardstadt. He is charged with a mission of some delicacy. Meanwhile the Imperium is sending orders from Wein for courier to brief her general on his next moves diplomatic and martial. Finally across the valley in Uhwerkhausen the Burgomeister's watchmaker is checking the mechanism of the clockwork peacocks recently brought out from their winter storage. He looks up disturbed by the sound of the Militia mustering upon the heath and firing its cannon ...
Finally if you have a spare moment could you vote in my poll at
http://armyredwhite.blogspot.com/ regarding uniform colour schemes-thanks in anticipation! 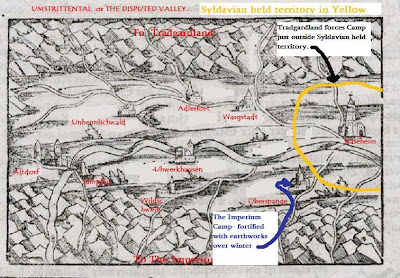