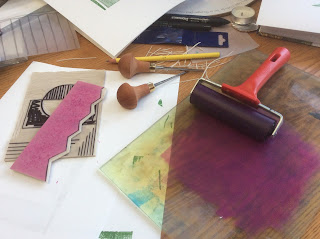 The kitchen table has been taken over. I do like the tools used and the effect achieved.
Last night we all sat down together and watched the second of the Fantastic Beasts films on terrestrial television complete with adverts. There is something nostalgic and or satisfying about rushing out to make a cup of tea or get pudding in these breaks . Much better than pausing the computer or dvd. It was a most enjoyable film, I am enchanted by the creatures.