Break on through to the other side 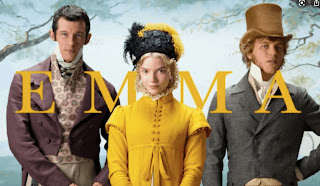 I have never been a fan of New Year. I was always glad to get through it, rarely stayed up to see it in and am glad when the barrier is crossed. My mother always stayed up for the Bells with a wee sherry and mince pie or something similar even when on her own latterly. She had come from a family who embraced New Year with a good party, sing song, opening the windows to let the old Year out and of course first footing. Sadly the customs have died out since my youth for most .
Our New Year’s Eve was pleasant enough. Monopoly late afternoon , a Chinese meal from M&S and a film. My middle daughter chose “Emma” and it was a relief to find something we could all agree on, my youngest being allergic to period dramas, sometimes. Incidentally this was the last film I saw in the cinema with friends just after my birthday in March. We all enjoyed the film immensely last night, my oldest daughter ( Austenophile)  revelled in the costumes which is her particular interest and the other too were caught up,like myself, in this super retelling of the story. After that we all went to bed. I listened to a recording of a Big Bash League game on the radio and was awoken by fireworks at Midnight. I hope you all had a good New Year’s Eve too.
A quiet day awaits and that suits me fine. One of the last jobs I did yesterday was to sign up for an Open Learning course for ten weeks come late January. . There are less being offered and the art history ones are either a repeat of one I took last year or a far too generalist one. So something different- Archaeology of the Ancient Near East. It will be online again sadly but that’s the 2ay it is, hopefully I will be back to my weekly trip to Edinburgh to face to face learning later in the year. I dare say that the course may feature in some hobby activity this year.
No big hobby plans to announce ( for now anyway)  today, just carrying on with those started and see where my butterfly flitting takes me ...
Finally I intend to continue regular ,hopefully  daily posts for the foreseeable future as I have done since March. Have a good day everyone.
Posted by tradgardmastare at 07:59