And now over to our highland correspondent Ronnie-

The Battle Of McHookie’s Croft

(With apologies to H G Wells)

But one hot August night  Morag entered into a common law marriage with Genghis McHookie, a (self proclaimed)successful travelling clod salesman.

Unfortunately Genghis had to leave Morag in the early hours of the following morning to attend an important meeting; after all, he was a very busy man. But Morag diligently  commenced hernew spousal duties.

To many she was the perfect wife. She doted over the croft’s animals, grew potatoes (which were golden and wonderful) andkept a clean and tidy house. Yet every evening she found time to have Genghis’s dinner on the table ready for his return fromwork. And even though he’d failed to appear even once during the seventeen years since their marriage she kept faith that one day he would; he was ,of course,  a very busy man.

To others, her heid was full of mince.

Which was just as well, because life on the croft was quiet and predictable and the presence of a stranger was.......well, strange.

Till the day the Redcoats came.

And the Irish (who wanted to be French but didn’t have the onions).

Oh, and a coach load from Manchester! 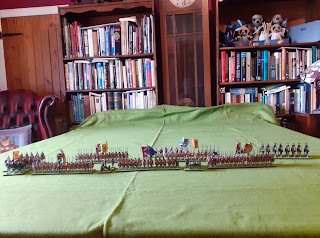 His Most Glorious Excellency The Prince Charles Edward Stuart

One mortar (for fun) 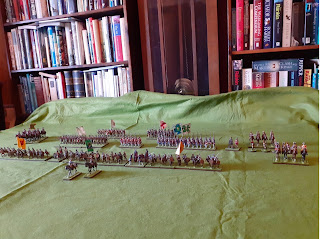 The above was written by Ronnie as a backstory for our forthcoming game today. He has graciously agreed to write an after action account of the battle which will appear sometime later on the pages of this illustrious blog. The die is cast or will be later today!
P.S Apologies to Ronnie and other readers for the white rectangle. It is not a picture of the surrender flag from one of the armies but a technical issue of my own making and ignorance.
Posted by tradgardmastare at 08:06