Saw part of this picture on A Gentleman’s War on Facebook but here is the full picture, evidently from the Illustrated London News- 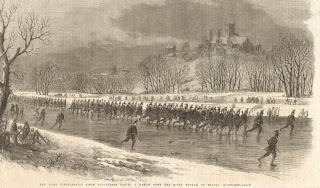 Please click on the above to make it bigger and note the caption at the bottom of the page. It reads-

The First Lincolnshire Rifle Volunteers taking a march down the River Witham on skates.

This is new to me and really interesting, rifle volunteers on skates,wow! Anyone can any further examples of such winter warfare preparations in Great Britain?
P.s just watched the Platinum Party at the Palace on BBC 1 , terrific entertainment and a most enjoyable three hours smorgasbord of acts. Anyone else watched its?
Posted by tradgardmastare at 00:00