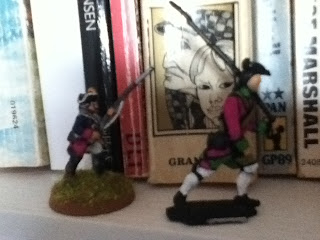 Well it has been a busy day which began withe the paintbrush out,continued at Ikea and proceeded by visiting my mother en famile... Just enough energy left to let you know that the Army of the Duchy of Tradgardland of 1730 will be depicted in 40mm using Prince August moulds and home casting. Two regiments already cast and on the painting tray. More tomorrow including Muster Rolls from the Duchy and my reconstruction of the Duchy's Order of Battle from archival sources.