I have been a tad  quiet these last few days due to coming down with another  bladder infection. The antibiotics have "kicked in" and I feel a little better. I decided to finally get round to painting a 40mm figure I got in Oct 1991 when on a short minibreak to Copenhagen with Jan. 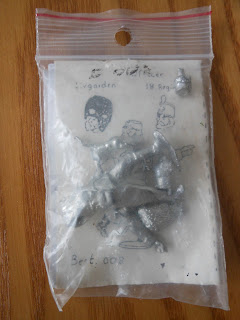 I got it in Model figures and Hobbies I think in Copenhagen along with a large format uniform book .I had visited the Tojhusmuseet and was beginning my love affair with things Scandinavian which has never left me.The figure has never been painted in all these years- 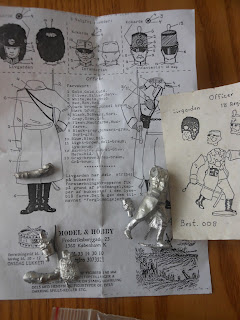 I decided it was high time to paint him.I hummed and hawed about doing him as an 1864 Dane in one of the three heads you see depicted.In the end ,due to his being such an old friend,I decided to paint him up as the Duke of Tradgardland in suitably Danish inspired uniform but with a Duchy of Tradgardland tweak.. 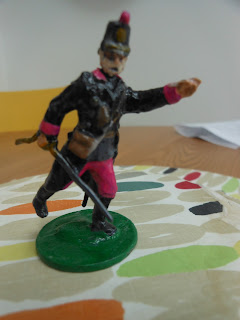 I have sent off for a 12man unit and a sample hussar (all Danes) in 42mm  from Irregular and hope they arrive soon.Table Top FLW is going to be the way forward hopefully.
Posted by tradgardmastare at 15:30