Britains/Herald rarities from the early 1960s

These figures came into my possession recently. I believe them to be made in limited numbers in the sixties after the unrest/civil war in the late fifties. Here are some photos of them. 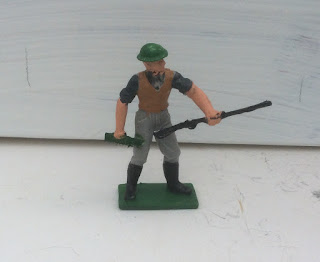 A milita figure based on the zookeeper model. He is equipped with steel helmet, rifle and Molotov cocktail in the form of a wine bottle. Notice the quick factory paint job. These were hastily produced to cash in on the victory celebrations. 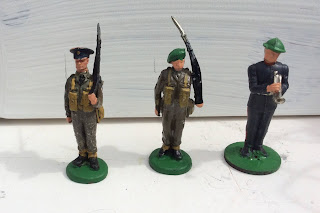 The above Royal Marine figures depict the Marines who fought in a mix of ceremonial and combat uniforms. Again hurriedly manufactured for the victory celebrations. Factory paint job is marginally better. Below are the final figures representing the Grenadier Guards who went into battle wearing their bearskins ( who can forget the famous picture of them in action on the streets of London on the cover of the Daily Express) due to necessity. Hasty factory conversions again with head swops and paint job. 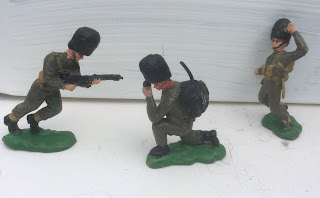 If  anyone finds any more of these rarities please let me know.