Dragon Rampant arrived today and has been well worth the wait. In anticipation of it's arrival I have been working on some fantasy types to go with my 40mm figures- 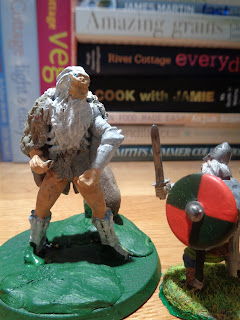 Here is one of those collectable Hobbit figures that come in a wee bag. I have added a modelling clay shaggy cape and repositioned arms. I include a 40mm viking for scale. An acceptable giant I feel. 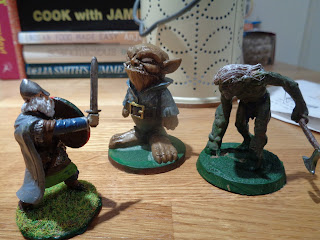 Again a 40mm viking for scale. The chap in the middle was bought from a garden centre "fairy" range and is as he came. The chap on the right is another hobbit wee bag collectable figure (probably of Gollum) with added hair and axe.Acceptable trolls/ogres I feel.
As for Dragon Rampant it is lovely to see the old school figures used as illustrations especially the ME wizard on page 46.
Posted by tradgardmastare at 17:06