I took some time to base these figures yesterday. I find them easier to work with them  based rather than holding onto the flat figure’s own metal base. Flats are very light and a tad fragile. It goes without saying that you only have two dimensions rather than three, almost like painting on paper,to deal with. These Celts are beautifully animated, most armed with those big swords that they had to flatten out at times  in battle. 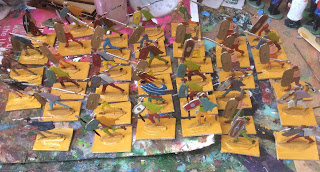 As they came with sandy coloured bases I have made the card that colour too. It is a change from green and one I find pleasing. They will form two units of twenty figures in each. I am not repainting them completely but just touching up where spears have lost their paint and arms too. Just a few touches and they will be ready.
The next to be worked on are the warriors from the Land of Flowers who have an Aztec vibe to them. I think I may add more variety to the feathers colour wise but we will see. As for their spearheads and weaponry I am in two minds whether to repaint them green/black to represent obsidian or not given the way they would have had access to bronze and iron weapons in my Bathesque setting. Perhaps a mix would do.