I always enjoy the mixed bag,broken figures lots on eBay. A look see what is there and time to spend thinking what you might use them for.  An important thing for me is also seeing a number of figures that make it worth a bid. One or two or more that you have been looking for for that project. 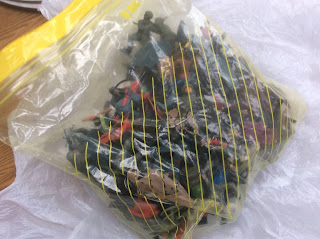 This was the lot that awaited my intervention, filled with potentially. Here’s the first sorted groups 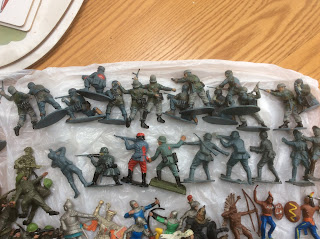 The main attraction was the number of 54mm German paratroopers which would fit into my Homeguard game. Just enough to provide  a suitable opposition. Airfix I imagine as are the German infantry in the middle row, always useful to have a few in the plastic pile. The bottom row has some medievals for my ongoing collection to use with plastic knights and a few recruits for the Maple Leaf games. The fellow with the bow is a figure I have never seen before. 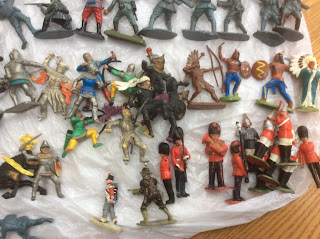 A better view of the mixed medievals including repairable Herald archers at a cheap price and some exotic Saracen looking fellows. A solitary metal 40mm Napoleonic is at the bottom along with an Australian. On the right are useful Guards and Lifeguards which will either serve as conversions or as  dismounted cavalry with the addition of a new rifle arm. Can’t have too men of these ceremonial figures in the plastic pile or spares box. 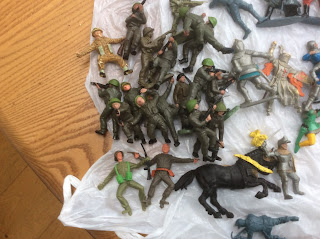 The final picture has a couple of Timpo figures.I  had quite a few as a boy but ,sadly to say, I wasn’t a big fan of the Cowboys,Mexicans etc. They were always the baddies who fought against the Britains who were the goodies. Above the Timpo figures are the other main attraction of the Lot the Herald infantry figures. I am getting some together to use in a very simple 50s/ 60s game where three figures     will represent a section or squad with heavy weapons represented by two figures and command by two also. I am still working out what each unit will represent entirely. A simple fun game to use these figures. I will mount them on coins were they have missing bases . So here we are at the end of my chatting through the contents. A few more battered Herald infantry are due to arrive.mI am wondering about converting a few very simply with heads in berets or without headgear but we will see. ..