Things are busy here in the Duchy of Tradgardland as I am sure they are where you are. It is not the time for long drawn out battles against the LeadPile but rather small raids. This is an example of one such raid- 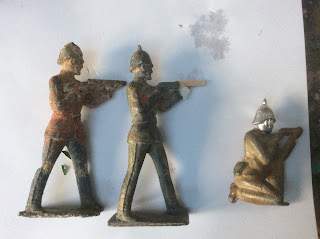 Three rather battered toy soldiers awaiting a game. They are half of a small unit I am working on. One has holes in his hollow cast  trouser leg perhaps from a stray round from a Britains cannon , the middle one has been given a paper and glue hand along with a cocktail stick rifle . The last one has a new Dorset head.  They will be finished in rifle green and are styled after the Robin Hood Rifles. Such a raid will keep eye, hand and mind in over the coming days.