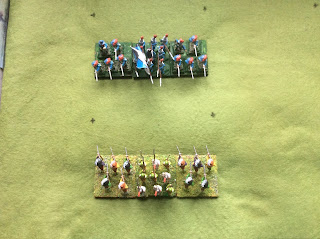 I am pleased with the look of the thing, next stage a trial game, hopefully very soon. 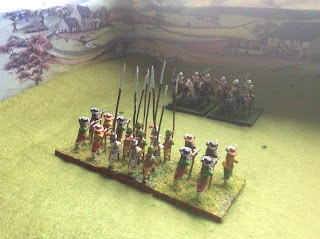 Now some comments on the book. Bob has done a splendid job editing it and the colour pictures add much to the interesting text. Bob has brought together many interesting rules in one book and should be commended for that very much. As one who enjoyed Arthur Harman’s magazine article and rules  about gaming a Sealed Knot type re-enactment battle ( and asked for Bob to include them in the book) I was delighted to see them. As an ex Sealed Knot pikemen I look forward to trying them out. Arthur has re written them for the book.  Being a fan of “By the Sword Diivded” I am excited to try out the ECW siege rules in the  book which are well written and make you want to go off and besiege something right there and then. These are written by Arthur Harman incidentally.
The other sets of rules will offer differing pike and shot experiences and read well. Also included is a Samurai variant too. Coupled with an introduction to the period and scenarios etc we have a splendid addition to the Portable Wargame series of books and one that deserves a place on your bookshelves. More than that it deserves to be used to play Pike & Shot period games both against others and solo too. Could be that last minute (ish) present for or someone or perhaps yourself. Thanks go to Bob and his contributors.