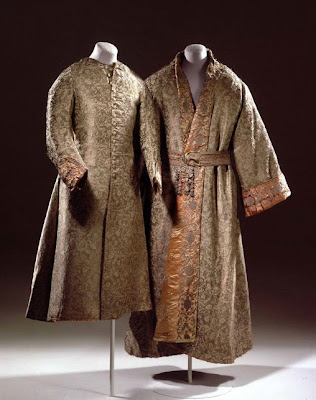 Well it has arrived and isn't it super- the CWJ that is ! Phil Olley has done a terrific job on the launch issue and I really enjoyed the contributions from you chaps - a loud huzzah to one and all!
I am considering,as a result of reading the CWJ, of adding Bluebear Jeff's personality ideas to my commanders in the forthcoming battle betwixt the Imperium and Ducal forces. I had not intended to use brigadiers but have been tempted so to do. I will post more command figures over the weekend.
Finally I could not resist posting a picture of these amazing dressing gowns worn by the Danish monarchy in the 18th century- they are fantastic and I would not say no to one here in Fife this winter...
I am tempted to try and find a 28mm figure to adapt to portray some Tradgardlander noble in such fetching attire- any ideas more than welcome for figure sources.
Posted by tradgardmastare at 11:50