It is very rainy here today and so I have continued with the first Gaslight unit and my first Major Hero(depicted here) who is Baron Von Bergman. His ancestor has appeared in my 18th Century Blog entry and is currently (in the past that is) engaged 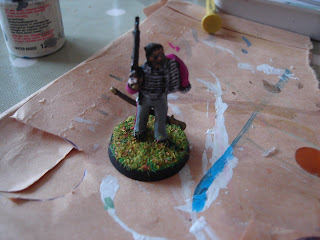 in a Jacobite Rebellion and susequent recovery from wounds sustained there.
The 19th century Von Bergman is President of the Ducal Society -a group of gentlemen who are at the cutting edge of scientific endeavour and progress. He wears his uniform of Colonel in chief of th Ducal Hussar regiment and is armed with a percussion pistol (replete with telescopic sight) of his own design and fabrication.

I also enclose a photo of the garden a few weeks ago for those interested in such matters. Courgettes are about to be able to be eaten and the peas and beans are not too far off. Whatever you are doing have a good weekend! 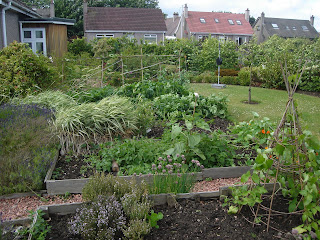