Out of Africa and Tradgardistan

I managed some game related time amidst household and garden matters. I am currently flitting about a bit  more than usual hobby wise but taking things forward- 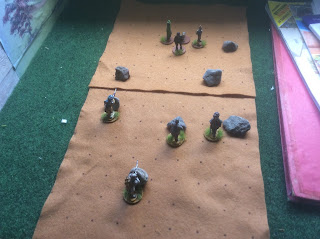 I marked out a one inch grid on a couple of spare squares of felt in dots. I wanted to try some simple skirmishes using https://pampersandp.blogspot.com/p/heroic-encounters-portable-wargame.html
Heroic encounters Portable Wargame variant. A few figures were set up with stones from the garden and an enjoyable skirmish was had. 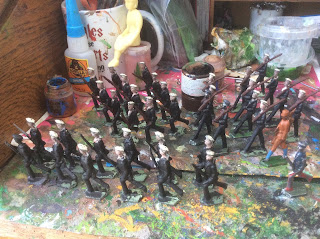 I began the forty or so 40mm  semi flat sailors that I gleaned from various places in the shed. I like the classic marching pose and the running figure too. Good solid toy soldiers . I tried a very basic paint job conversion ( although the figures cap peak was removed too  albeit clumsily by me) to produce a 1914 German Askari from East Africa. Not sure I like how he turned out but I will have a think. I have enough figures for a twelve man unit if I go ahead.