I was early at the Virtual Wargames Club last week, I asked a casual question about a set of rules I had found on the shelf way at the back and that was the start! My kind and knowledgable  expert extolled the virtues of “Danger Close” rules from Empress Miniatures to me and I discovered they were only two pages long! I had always thought that Modern meant mammoth tomes filled with charts and the need for mathematics well beyond me. How wrong I was ! By the end of the club meeting I had ordered the rules and some fascinating Bundeswehr figures arrayed in weaponry and systems beyond my ken. Here they are 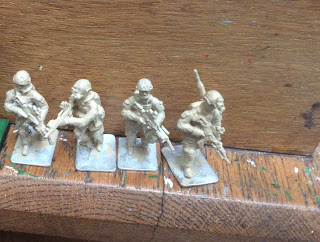 “IdZ-ES (Infanterist der Zukunft-Infantryman of the future, also know as Gladius
Heads glued on and undercoated. But how to get my head round a new period? True the family all enjoy watching “ Our Girl” but that doesn’t make one an expert.  My German fellows have  something called Gladius , it’s all very complicated. I am looking for reading suggestions for a way into this all. I am going to use imaginations for the Modern Period as I feel more comfortable about gaming it this way. So it is the present day in a Europe fragmented into small small countries that form a successor to the Holy Roman Empire.  Squad level, few figures standard European terrain with a quaint feel as those are the buildings I own. Half timbered , countryside not urban. Now I need to find out how to pain5 these chaps , help!!!