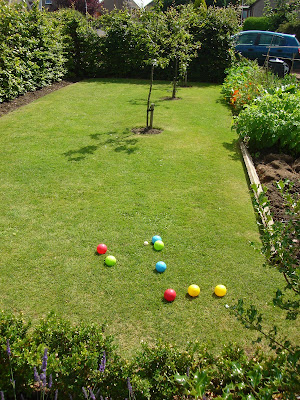 It is High Summer and the annual Boules championship has carried on for some weeks now in spite of some odd patches of rain last week....

We got the plastic set we still use around 10 years ago from the Early Learning Centre locally. They are still going strong and have been used in countless games here and at our holiday destinations over the years.

The girls have played since they were small and have grown up with the game- as teenagers they are still as keen ( and competitive!) as ever. Over the years I have had countless hours of fun with them and the game has developed and changed with the garden too.

Yesterday saw 13 games being played - myself without/with a partner against my other two daughters. It is played to win with no quarter sought or given - but mostly in a civilised fashion.

The game has much in common with Crown Green Bowling in so much as the slopes of the terrain add much to the game and the boule are thrown any way across the grass. A newish variant has seen the boule tossed across hedges ( very carefully I might add to preserve the garden) and over paths ( all boule ending up in a border or path are declared to be out of play) to add to the excitement.
A cheap purchase many moons ago has given hours of fun over the years and many happy memories too. BTW do any of you play games in the garden- other than with Lead Soldiers? Have a good weekend and may the sunne shine on you and yours.
Posted by tradgardmastare at 06:32