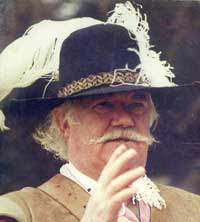 > Now to Charge ECW.
> The article I have here is from "Bayonet" vol3 no 1 December 1969- the only issue I have or have ever seen bought as part of a job lot of stuff many years ago from Don Featherstone .
> Most of the article is simple basic knowlwdge but there is a short piece - including a "Charge style" diagram A BODY OF ecw foot
> They are inn 3 ranks central body of 16 pikes and 2 ensigns then 2 wings of 9 musketeers each
> between the 3 bodies are 5 officers and 4 serjeants with 2 drummers- a CO is also present so the unit isa total of 46 figures.
> .For my money ist over officered and under " musketed" but would suit early Royalists. Parliamantarians would normally have 2 muskets to each pike as would some Royalist units when they could Scots also - though 3 to 2 was not unknown.
> Young makes the point that this body could represent a Tercio - 2 or more regiements in 1 body
> he also remarks
> "Of course the troops would normally be 6 deep but one is compelled to scale things down"

I do hope we find out more...
Can you help?
Posted by tradgardmastare at 12:32