The Town of Oberspange Summer 1760- one year ago from today... 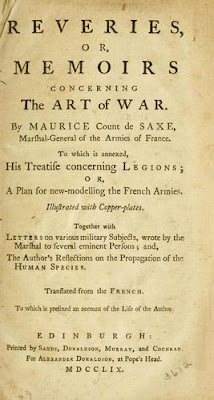 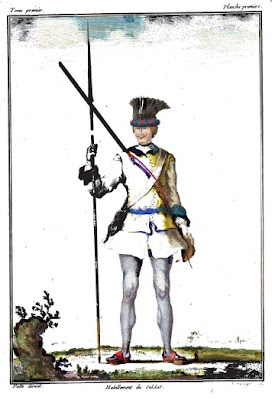 The Burgomeister of the town of Oberspange in the Disputed Valley is known for his interest in matters military. As much as it lies within his power and finances he takes a keen concern for the safety of the town. The town walls are kept in good condition,the watch towers manned and the town guard regiment drilled to within an inch of it's life.

For days now Herr Schroeder ( for that if the Burgomeister's name,more accurately Captian Schroeder ,as he is a veteran of the Scmaldz Revolt and subsequent campaigns)
has been pouring over a tome in his study. The book came direct from the publishers in Edinburgh and has engaged him to the cost of his sleeping and eating. "The Reveries or Memories concerning The Art Of War" by De Saxe has supplied Herr Schroeder with all he needs (apart from money and the goodwill of the Town Council) to turn the town guard into a LEGION using the book as a guide for new- modelling.With one final lingering look over the coloured print of a soldier armed and uniformed in the style of De Saxe , Herr Schroeder puts on his best coat,dusts himself down ,puts his sash of office over his shoulder,tucks the book under his arm and goes out to talk to the richest and most influential family who sits upon the Council...

The above is some "fluff" surrounding my small painting project for this final weekend of the summer hols- to get a De Saxe Legion ready for the wargames table to fight in the current campaign. I have a few figures resembling the above print and I have been promised enough to be able to finish the unit.It will be great to see an ,albeit small, De Saxe Legion on my tabletop...